Burmese long-tailed macaques are clever little monkeys. Since 1887 we’ve known that these enterprising primates of Southeast Asia use stone tools to obtain food—a rare skill confined to only a few non-human species.

Now, an international team of primatologists and archaeologists have cracked the complex code of marks and scratches that macaques leave on their tools. By scientifically matching these distinctive use wear signatures with macaque feeding behaviour, they’ve found a formula that can predict the function of individual items in a monkey’s toolkit.

The tropical beaches of Piak Nam Yai, a tiny forested island in Laem Son National Park on the west coast of Thailand, are an idyllic setting for primatology fieldwork. In 2005 an elusive group of about 200 wild Burmese long-tailed macaques (Macaca fascicularis aurea) was discovered here. Most of these monkeys habitually use stone tools.

The macaques use two main types of tool to collect and open shellfish and nuts as they forage in the intertidal zone along the shore. Axe hammers are handheld stones with an edge, good for rapid, high-precision chopping. Pound hammers tend to be larger, with flat surfaces used for a heavy-duty smashing action.

But as the monkeys don’t deliberately modify the shape of the stones, the natural morphological differences are not a reliable way to distinguish between axes and pounders. When tools are separated from behavioural contexts—as when found on archaeological excavations—it can be difficult to tell them apart. A mathematical formula was needed that could identify the function of a tool from its wear patterns alone.

Michael Gumert, an American behavioural primatologist at Nanyang Technological University in Singapore (NTU) has been working on a solution. He has spent hours watching the macaques from a small boat a few metres off the island shore, keeping careful records of tool using behaviour and photographing each monkey as it worked. As blissful as it sounds, this was a tough job.

“Working in the intertidal zone is really complicated,” says Gumert. “The tides change all the time so you can’t ever set a daily schedule, each day is different. Also, most of the tools and everything the monkeys do is washed away and reset every day when the tide comes in.” 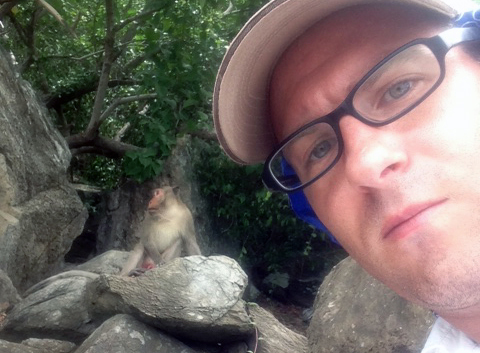 As the macaques discarded their tools after use, Gumert came ashore to collect and categorise them. In this way he managed to gather 60 stone tools that were linked to detailed observations of use and function.

Archaeological use wear analysis on the tools was conducted in Laem Son National Park, where Gumert was joined by archaeologist Michael Haslam from Oxford University. In an effort to avoid bias creeping into their interpretations they conducted a blind study, analysing the stones at face value without reference to Gumert’s behavioural observations.

Haslam used a 3D laser scanner to create high-definition digital images of each tool. This was the same cutting-edge technology famously used to document the early hominin tools from the Stone Age site at Happisburgh in the UK. The technique made the markings on the tools clearer and easy to study on a computer, while also forming a virtual database for the collection.

To quantify the wear patterns, the surface area of each tool was divided into ten spatial zones, and the markings on the stones were categorised into four wear types: crushing, pitting, fracture, and striations. Each surface zone was ‘scored’ according to the type and density of markings present. From a statistical analysis of the collated data, the team then predicted what they thought each tool had been used for.

When they compared their predictions with Gumert’s behavioural data, the researchers discovered that the placement of crushing marks contained the key to determining whether a tool was an axe or a pounder.

Indeed, the key was so reliable that it formed the basis for a predictive mathematical formula that they called the Use-Action Index (UAI). From quantified use wear patterns and tool weight, the UAI can successfully distinguish between axe and pound hammers with 92% accuracy (PLoS One, doi:10.1371/journal.pone.0072872).

Gumert is excited about the significance of the discovery for primatology, but there are also implications for archaeology.

“Primate archaeology allows us to look at stone tools from a broader perspective,” Gumert explains. “Whenever archaeologists find a stone that has been used as a tool, the artefact is immediately thought of as a human tool. For manufactured stone tools, that remains correct. But if they’re unmodified pounding tools we now need to ask who used them.”

Watch the macaques at work in this video, filmed by Gumert and his colleagues.

Future research on primate use of stone tools will look for species-specific signatures in the markings.

“When a monkey uses a tool, are the traces left on the stone slightly different than the traces left by a chimpanzee, or by a human?” asks Gumert. “If primate archaeology can work that out, I think it will be helpful to archaeologists. And maybe some archaeologists will find that some of their pounding tools were not human after all, who knows?”

But the time for future studies may be running out. Macaques are highly adaptable, and their traditional feeding behaviours are at risk. The encroachment of human populations into macaque habitats may threaten natural tool using behaviour, particularly in tourist hotspots like where Gumert is currently working.

“It’s a blessing and a curse,” says Gumert. “Human populations have made the monkeys habituated in places like this, which gives us an opportunity to get close to them. We can’t do that on Piak Nam Yai where the monkeys are still wild.”

But the advantage of being able to get closer to habituated macaques comes with a price.

“This morning a tourist boat pulled up here to the shore and sounded its horn, and ninety percent of the monkeys dropped their tools and ran over to the boat to get some free bananas,” says Gumert. “I don’t think this is going to destroy their behaviour, but I think it certainly changes it.” 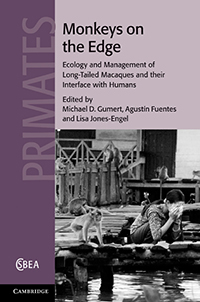 Read more about the work of Michael Gumert and colleagues:
Gumert, M. D., Fuentes, A. and Jones-Engel, L. (eds) (2011) Monkeys on the Edge: Ecology and Management of Long-Tailed Macaques and their Interface with Humans. Cambridge University Press.
Available from Amazon.