Digital Badges: the future of credentials?

Were you ever a Boy Scout, a Brownie or a Girl Guide? Do you remember the thrill and satisfaction of earning a merit badge for some achievement, and the pride of having your accumulated credentials displayed on your uniform for all to see?

Well this concept of earning badges has recently gone digital, and the reach of this new merit system is rapidly expanding beyond the realms of after-school youth clubs, and into higher education and professional development.

But what are digital badges? Where did they come from, and how useful are they as indicators of educational or professional achievement?

Digital badges have been circulating on the web for some time, but they were not originally about recognising academic educational achievements. They were linked to activities, accomplishments and proficiencies demonstrated within distinctly social contexts.

The location-aware smartphone app Foursquare, for example, uses an extensive system of badges to reward ‘players’ for their geo-spatial activities. By ‘checking in’ to different venues on their mobile devices, users earn badges and, over time, can gain recognition as the ‘mayor’ of a venue they check into more frequently than any other user. The reward? A certain superficial sense of superiority over competing users in the locality perhaps, but also various discounts and offers from the businesses concerned.

Another example that has direct relevance to employability issues is the badge system used by Stackoverflow, an online community of web developers and coders. Community experts in this space who offer advice and solve problems for other members earn badges that identify their particular contributions or areas of skill. Potential employers can browse the badge collection of a community member to get a detailed insight into the skills and capabilities he or she possesses.

Mozilla, the company behind the popular open-source Firefox web browser, has now developed an infrastructure to support a global digital badge ecosystem. Known as Mozilla Open Badges, this free platform allows anyone to design, validate and award digital badges for almost any kind of accomplishment. The badge issuer decides which criteria must be met for a badge to be earned, and this information is ‘baked’ into the digital image of the badge itself as metadata. This can include a link to the product or the piece of work for which the badge was awarded, providing an easy way to validate the achievement that a badge represents.

So what value do digital badges really offer? One thing’s for sure: they are no longer just a game. Badges are rapidly gaining momentum as a serious new currency of credential.

Earned badges are gathered in a personal online ‘backpack’ from where they can be displayed on social media sites, online CVs, and anywhere else where the badge holder may want them to be seen. Badges can tell a potential employer a much more detailed story of accomplishment than certificates or transcripts alone. As each badge can be independently verified by the issuer, they also represent more reliable testimony than what might appear in a resume.

In a 2014 presentation, Deb Everhart, Director of Integration Strategy at Blackboard, explained why the traditional credentialing system is flawed. “What do we mean by currency when we’re talking about education?” she asked. “When you think about badges and degrees, they have a currency, they have an exchange value. We go to a university, we enrol in courses, we pay the tuition, we get grades, we earn a degree. And then we use that degree to go out and get a job. But how well is this ecosystem actually working? Unfortunately, there are millions of college graduates who don’t have jobs or are under-employed. They’re not getting the exchange value out of those degrees.”

In a recent webinar for Mozilla, Megan Cole, Director of Marketing and Operations for the Badge Alliance, said that badges are about reimagining credentials. As she explained: “It’s this idea of capturing the complete learning path, and really being able to build and communicate your reputation and identity, ultimately, online. It’s really about reinventing or augmenting existing credentials that are granular, evidence-based and transferable.”

School’s out, time to learn

As an emerging ecosystem of informal credentials that contribute meaningfully to formal processes like job or college applications, Open Badges seem to offer real value for documenting and recognising learning that occurs outside the formal context of the classroom.

In 2013, Open Badges were really put to the test in Chicago, Illinois, for the pioneering Chicago Summer of Learning project. This eight-week initiative was intended to address what organisers call the “summer learning drop-off” among students — the decline in learning that typically happens during the long summer holidays.

With the endorsement of the Mayor, over 100 organisations across the city participated in the project, working with Mozilla to design and award a range of badges for all kinds of activities. The programme was intended to get young participants involved in five main disciplinary areas, collectively referred to as STEAM: science, technology, engineering, arts and mathematics.

Learners ranged from six to twenty-five years old, with most in the thirteen to eighteen age range. They worked with one or more of the participating organisations, and earned badges for particular skills or achievements. They could accumulate multiple entry-level badges to earn the ‘City-Level’ badge in whichever STEAM discipline they had been working in. Once earned, the City badges unlocked access to additional challenges with a sharper focus on professional skills and employability.

Feedback from participants is still being gathered, but from initial reflections on the experience it looks like it was a huge success. “I think we got an excellent response,” said Carla Casilli, formerly of the Mozilla Foundation and now Director of Design and Practice at Badge Alliance, “considering it was the first time a city had decided to institute anything of this magnitude.”

Part of the philosophy behind the development of digital badges is inspired by the progress mechanics theories of learning gamification, where low-stakes reward mechanisms are introduced to teaching and learning to add a game-like quality to the learning process. But the gamification of learning is a highly-debated issue, and not everyone is convinced of its value for encouraging motivation.

Writer and motivation expert Daniel Pink, for example, suggests that when extrinsic motivators are enhanced, through badges and other types of rewards, intrinsic motivation decreases. Whether in the workplace or in the classroom, the outcome is an overall decline in performance.

Another area for concern is that learning designers who try to gamify teaching don’t fully appreciate how complex a gamer’s motivations are, and how his or her commitment to a game is deeply intertwined with the community of players. As video game theorist Ian Bogost has explained, the primary value of games is that they replicate and manipulate complex systems of behaviour. Gamers participate in an intricate value ecosystem in which they can accumulate status and power, and in which they can build a reputation for mastery that is valued by other players. It’s these elements of a game that keep players motivated, and not necessarily the simplistic goal of scoring points or completing a level.

But by developing and applying an understanding of these dynamics, the careful integration of a badging system in education may prove beneficial to some kinds of learners for particular types of learning experience.

Aside from motivation, the value of digital badges as granular, verifiable records of achievement looks promising, and in this regard they may effectively compliment other initiatives geared towards similar goals, like the UK’s Higher Education Achievement Reports (HEAR) which are now offered to learners at many universities across the country. This type of application as a currency of credentials seems likely to become increasingly prominent.

So, while the jury may still be out on the actual pedagogical impact of badging systems in teaching and learning, the phenomenon seems likely to grow, and to attract further research and experimentation. Emerging ecosystems like Mozilla Open Badges may end up driving — or at least facilitating — much of this development. Other networks and organisations like Badge Alliance and Credly in the States, and Digital Me in the UK, are also having a growing impact as they launch pilot projects, grow communities, and offer examples of best practice. 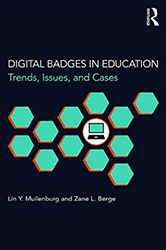 Find out more about digital badges in: