Egypt: Faith After the Pharaohs

A special exhibition at the British Museum tells a 1,200-year story of religious transition in Egypt, from the worship of hundreds of ancient gods to the rise of the monotheistic religions that coexist and contest today. Egypt: Faith After the Pharaohs explores the multidimensional ritual tapestries of this land, from the Roman Empire to the Ayyubid Dynasty.

Detail from a page of the Codex Sinaiticus. (Image: Archive.org)

I’m standing in front of one of the most important books in the world.

The Codex Sinaiticus, with its yellowed parchment pages covered in blocks of meticulous Greek script, is one of the two oldest Christian Bibles in existence. This part of it contains the earliest surviving complete version of the New Testament. It is a rare treat to get such a close look at this beautiful artefact, just a few inches below the glass.

It’s in good company too, flanked on either side by two treasures from the 9th to 10th centuries—a rare Hebrew Bible containing one of the earliest examples of Jewish manuscript illumination, and an early Qur’an, written in Kufic script on luxury vellum.

I could pore over these phenomenal objects for hours, as they have already made my visit worthwhile. But I’m eventually lured away by the prospect of further treats within, as promised by the introductory film that offers a sweeping overview of religion and culture in post-ptolemaic Egypt. Potent themes of conflict, coexistence, fluidity, and a continuous re-imagining of cultural and ritual expression are to be explored ahead.

Walking around the corner I am suddenly confronted by the iconic face of Augustus, his haunting calcite eyes piercing the dim of the gallery. This immaculate bronze head was excavated in 1930 from the sands of ancient Meroë. There, in its original context, this larger-than-life statue of the Roman emperor must have made a powerful statement at the southern reaches of his realm in 25 BC. 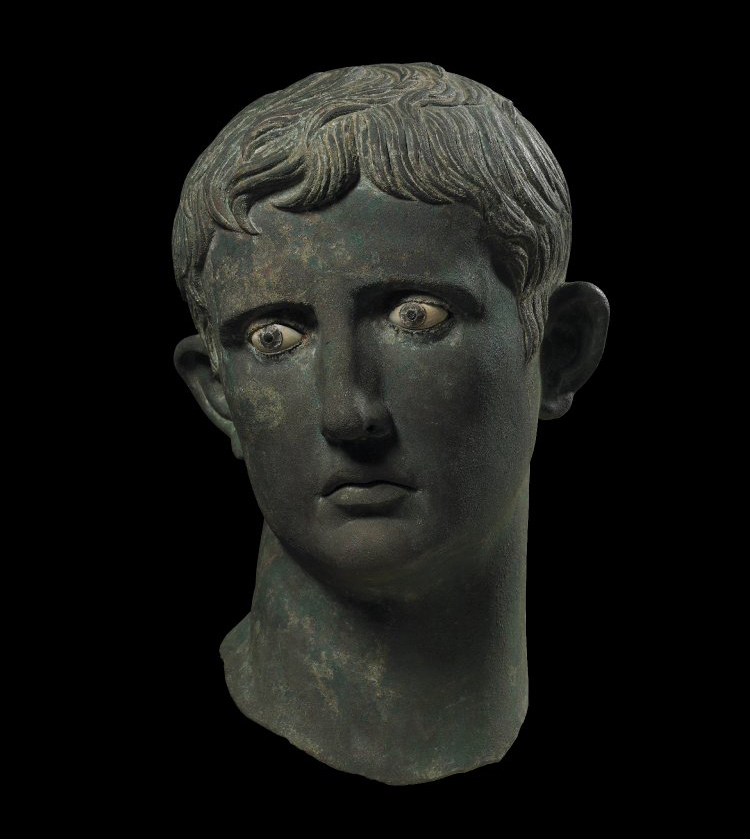 Bronze head of Augustus from Meroë, 27-25 BC. (© Trustees of the British Museum)

Hundreds of gods were worshipped in Roman Egypt, and the countless statues, figurines and paintings here reveal eclectic and malleable iconographic trends. Intriguing examples of conceptual blending can be seen in the bronze and limestone falcon-headed statues wearing Roman military armour—a symbolic fusion of Egyptian god and Roman emperor.

By the time Egypt became part of the Roman Empire, Judaism was already firmly established here. Delicate fragments of history reveal ancient traces of the Jewish presence, like the scrap of papyrus letter from around 419 BC that speaks of Passover feasts, and the stone inscription dedicating a synagogue in 146 BC. Jewish customs were generally tolerated by the Roman authorities, and Jews were allowed to continue their religious practices without much interference. 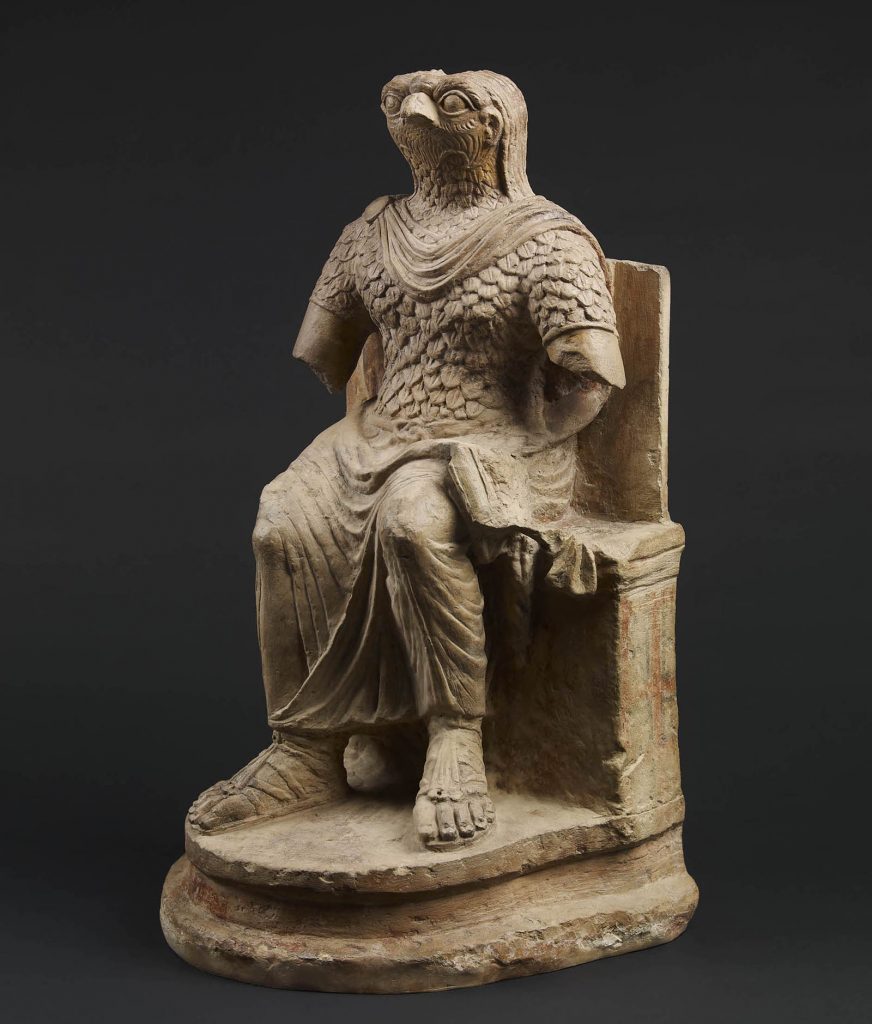 Things were quite different, however, for the burgeoning population of Christians, whose faith had proliferated in the region by the 4th century AD. Before Christianity became the official religion of the Roman Empire in about AD 312, Christians were often seen as a subversive and disobedient sect. They faced periods of intense persecution, aggravated by their refusal to make ritual sacrifices to the gods of the empire.

The first Christians were, of course, Jews who believed that Jesus Christ was their Messiah, and there are some thrilling items from the early Christian period here. A tantalising 3rd century fragment of the Gospel of Thomas claims in original Greek script that “These are the [secret]  words that the living Jesus spoke [and Judas]  also called Thomas [wrote down].” Even more obscure is a fragment of the Gospel of Mary, in which Mary (possibly Magdalen) is asked by Peter to share her “secret knowledge” with the disciples.

In this short video, Roberta Mazza, Research Fellow of the John Rylands Research Institute, tells us more about the Gospel of Mary.

The idea of a woman adopting a position of spiritual authority over men certainly seems to have been an uncomfortable idea for the members of the Nicene Council, and they decided not to include either of these texts in the official version of the New Testament. Their decision is underscored here by the presence of the oldest surviving manuscript of the Nicene Creed, a 6th century treasure on loan from the John Rylands Library at the University of Manchester.

Islam had been growing in influence through a series of invasions since the 7th century, and by the 10th century it was a pervasive presence. When Egypt was conquered by Salah al-Din in AD 1171, bringing an end to the Fatimid Caliphate, he made Islam the official religion. We are treated to a rich and intriguing assortment of artefacts from the medieval Islamic period here, including handwritten curses on fragments of parchment, and a gold coin from the late 7th century stamped with the earliest known depiction of a Muslim—Abd al-Malik, the fifth caliph of the Umayyad Arab dynasty.

The exhibition ends with a final staggering flourish—a small bag of parchment fragments, collected in 1869 from the Ben Ezra Synagogue in Old Cairo. This was a tiny sample of an enormous trove of around 300,000 manuscripts—including religious texts—that had been preserved in the synagogue geniza (a sacred store room) over a period of about 1000 years from the 9th century. The entire collection was brought to Cambridge in 1896 by Solomon Schechter, whereupon the archive was divided. It is now kept in several academic libraries around the world, and scholars are still working to record and digitise this vast and extraordinary resource. Some of the documents can already be explored online, reflecting an exciting trend towards making museum collections—including those of the British Museum, available on the web to a global audience.

I leave the exhibition with a new appreciation for the last two millennia of Egyptian history and culture. While pharaonic marvels may continue to dominate headlines and imaginations, this unique assembly of treasures, and the depth of the story into which they are woven, have made an unforgettable impact on my perspective of this land and its people. 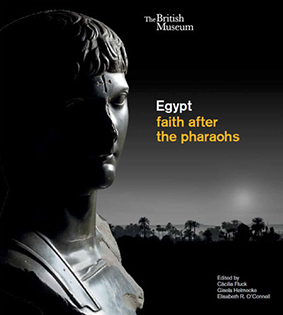 The exhibition is supported by the Blavatinik Family Foundation, and runs until 7 February 2016.

There is a beautifully illustrated companion book:

Available from the British Museum and from Amazon.