Research shows that bird populations suffer a significant increase in mortality rates when there is a wider range between daily lowest and highest temperatures—especially in warmer climates.

Michael Briga and Simon Verhulst, of the University of Groningen in The Netherlands, studied a colony of captive zebra finches (Taeniopygia guttata) over a five-year period. The goal was to measure how sensitive the birds were to short-term daily temperature variations.

All of the birds were kept in outdoor aviaries, so they were equally exposed to natural climatic conditions. To assess the impact of environmental quality on the birds’ sensitivity, the colony was split into two groups, and the environment for each group was manipulated.

Half of the birds were given easy access to food, as is typical in laboratory conditions. The other half of the colony had to work harder to eat—the convenient perches underneath their seed boxes were removed so they had to hover outside the boxes to grab seeds. This “hard foraging” is more like the way finches forage in the wild.

The study found that when the diurnal temperature range (DTR) was greater, more finches from both groups were dying every day than when daily temperatures were more constant. For the birds with easy access to food, every 1°C increase in DTR was associated with a 36 percent increase in mortalities.

But this effect was particularly pronounced for the hard foragers. For the finches who had to work harder, every extra degree in DTR was associated with a death rate increase of 104 percent.

As global climate changes seem to be increasing DTR in some parts of the world, this could indicate trouble for many wild bird species, and possibly for all warm-blooded animals in these regions. Indeed, previous studies have shown that humans are also susceptible to the DTR effect—increases in daily temperature ranges are associated with more hospital admissions and deaths among elderly people.

An interesting twist in the results, published in Nature’s Scientific Reports, was that birds who had easy access to food were only affected by DTR during cooler months of the year. By contrast, the hard foragers felt the impact during warmer periods.

In the context of global warming, this could mean that the relationship between rising average temperatures and increasing daily temperature ranges will be an important factor to consider when trying to predict the impact of climate change on wild animal populations.

The specific causes of the DTR effect are not yet fully understood. But the researchers explain how, “regardless of the underlying physiological mechanisms, our results, together with those found in humans, show that DTR effects are important for survival and hence for understanding and predicting population responses to climate change.” 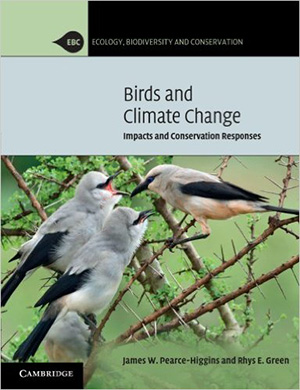 You can learn more about the impact of climate change on bird populations in: