Archaeologists in Belize have deciphered a puzzling hieroglyphic inscription on a recently-discovered Mayan jewel.

The sacred T-shaped stone was found in 2015 at the hilltop settlement of Nim li Punit, one of the earliest Mayan sites in southern Belize. It was uncovered with a rich collection of objects in a royal tomb, and is one of the largest carved jade artefacts ever to have been legally excavated in the Mayan region.

The front of the artefact is engraved with the hieroglyphic symbol T503 or ik’, which means “wind and breath”. The reverse is also covered in text, but the meaning of the glyphs on the back have been harder to interpret.

Archaeologist Geoffrey Braswell, a professor in the Department of Anthropology at the University of California San Diego, has been excavating in Belize since 2001. He found the stone at Nim li Punit after seven years of investigation at the site.

After careful analysis, Braswell believes the object is a wind-jewel, a pectoral stone or pendant worn by Mayan kings during royal scattering rituals. These ceremonies involved throwing incense into a fire to celebrate important endings of periods in the sacred calendar.

Elsewhere at Nim li Punit, carved monuments (stelae) have been found depicting scenes of these rituals being performed, and two of them show the wind-jewel actually being worn by the central figure. According to the inscription on the back of the pendant itself, this particular stone was first worn for such a ritual in AD 672. 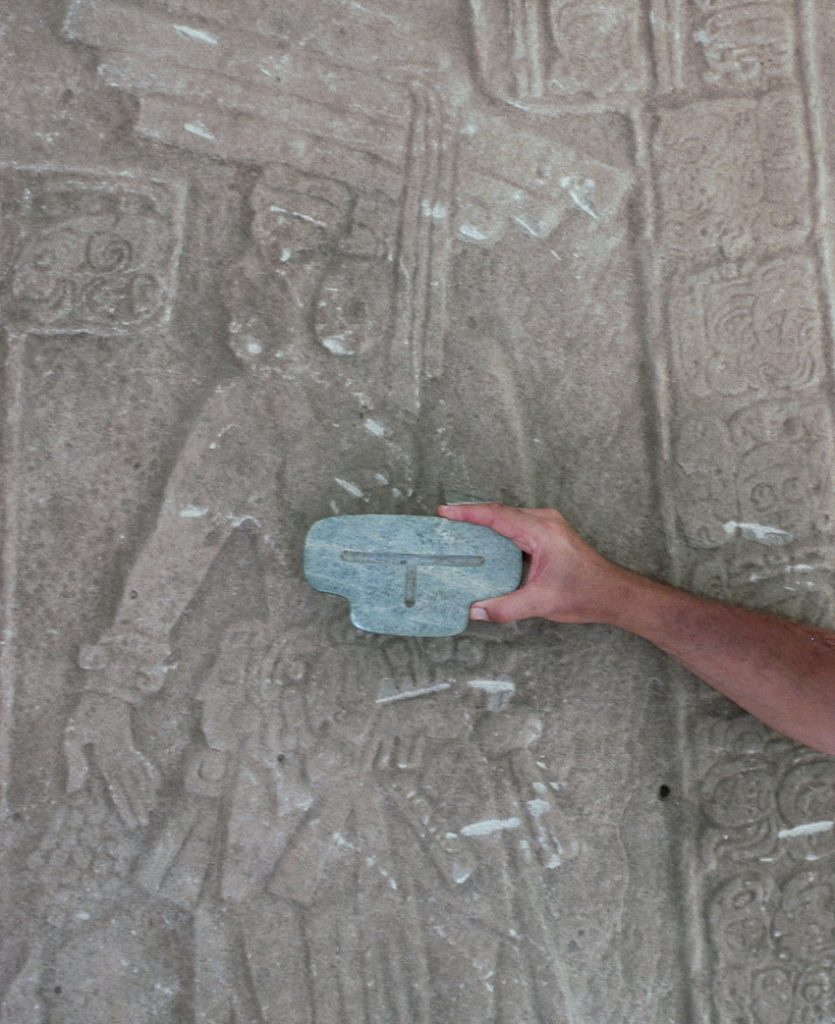 A carved image at the site where the pendant was found pictures a later king wearing it during an incense ceremony. Photo: Courtesy G. Braswell/UC San Diego.

Although some of the text is still being deciphered, Braswell, and collaborator Christian Prager from the University of Bonn, believe it tells the story of how the jewel was made for a king called Janaab’ Ohl K’inich. It describes the king’s parentage, revealing that his mother was from a distant site called Cahal Pech in western Belize, and that his father may have been from Guatemala but died young, before the age of 20.

The inscription, recently published in the journal Ancient Mesoamerica, may also hint at a connection between this king and the powerful ancient city of Caracol to the north.

“We didn’t think we’d find royal, political connections to the north and west of Nim li Punit,” Braswell said in a statement. “We thought if there were any at all that they’d be to the south and east.”

Braswell hopes that when completed, the interpretation of the inscription and further investigation of the site may shed new light on political and economic networks, and reveal previously unknown ties and alliances in the Mayan world.