Ecologists have discovered that biodiversity suffers more when habitat destruction starts at the outside edge of a region and moves towards the centre.

Climate change and human activities are the primary forces behind the rapidly accelerating destruction of natural habitats across the planet. Hundreds of animal species have been lost over the last century alone, and many more are quickly slipping towards extinction.

It has never been easy to directly measure the extent of biodiversity loss because we still don’t know exactly how many species there are in the world, or where they are all located. Given this limitation, it’s difficult to accurately count the number of species that have gone extinct. Ecologists rely on indirect methods of estimating threats to biodiversity, by studying the relationship between the size of the area of lost habitat and the number of species known to live there.

Dr. Petr Keil, formerly at Yale University and now Post-doctoral Fellow at the German Centre for Integrative Biodiversity Research (iDiv), and colleagues, claim that such methods are not only flawed, but can be misleading. They adopted a different approach to the area-species relationship, by looking at how the direction of habitat loss in a region makes a difference to the amount of damage done to biodiversity.

The study, published in Nature Communications, measured the effect of different habitat loss patterns on three animal taxa in parts of North and South America, Africa and Asia. The team discovered that in all geographical areas, damage to biodiversity was greater when the direction of habitat destruction came from the edge of a region and progressed towards the centre. This was true for all measures of biodiversity: phylogenetic, functional, and particularly for species richness.

“We find,” they explain, “that for amphibians, birds and mammals in nine regions on four continents, simulated inward area loss leads to greater loss of species richness than outward area loss, and that the randomly scattered habitat loss leads to lowest loss of richness.”

As habitat destruction often occurs in an inward direction—through encroaching farmland or rising sea levels, for example—this discovery will be important for more accurately estimating the threat of extinction posed by such processes.

The research will also be useful for predicting which species are likely to face the greatest danger. While all wild animals are potentially at risk from habitat destruction, “the proportion of species predicted to go extinct in a given area is generally highest for amphibians.” 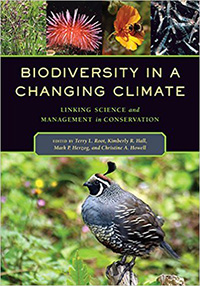 Learn more about the relationship between climate change and biodiversity in: