The British Library in London is currently hosting a special exhibition called West Africa: Word, Symbol, Song at the main St. Pancras site. This is a rich and fascinating celebration of the civilisation, history and art of the 340 million people living in the 17 countries of the region.

As soon as I walked in I could hear music and singing drifting up from deeper within the gallery, and I knew this was going to be special. A dazzling screen in the entrance area displayed a rapid, colourful overview of West African people and society, whetting my appetite for cultural discovery. It was clear that for the next couple of hours, I would be swept far from London.

The experience is structured around five themes, each focusing on a different dimension of West African culture. The journey begins with the earliest civilisations and the great West African empires, from the 2,000 year-old city of Djenné-Djeno in present-day Mali, to the later Oyo and Asante empires of the 17th and 18th centuries. A large timeline on one of the display panels provides a helpful visual representation of how the various kingdoms and empires relate to each other chronologically and geographically.

The legends of historical West African heroes have long been shared through music and song, and they are brought vividly alive here with a filmed stage performance of an epic about Sunjata, the founder of the Mali Empire. Watching Hawa Kassé Mady Diabaté in command of her theatrical narrative, we get a powerful sense of how important the musical arts have been to the peoples of the region—a theme that runs throughout the exhibition.

Although most of West Africa had been carved up by European powers by 1885, histories and traditions were preserved by griots – musicians, praise singers and poets. One of the most distinctive griot instruments is the kora, a type of harp made from a calabash. There is a beautiful kora here, made in Gambia in 1979. It is displayed alongside an ethnographic photograph taken in Senegal in 1904 by the French photographer Edmond Fortier, and an even earlier illustration from Alexander Gordon Laing’s 1824 travel journal. These evocative images of griots playing their instruments show the kora in its original cultural context. 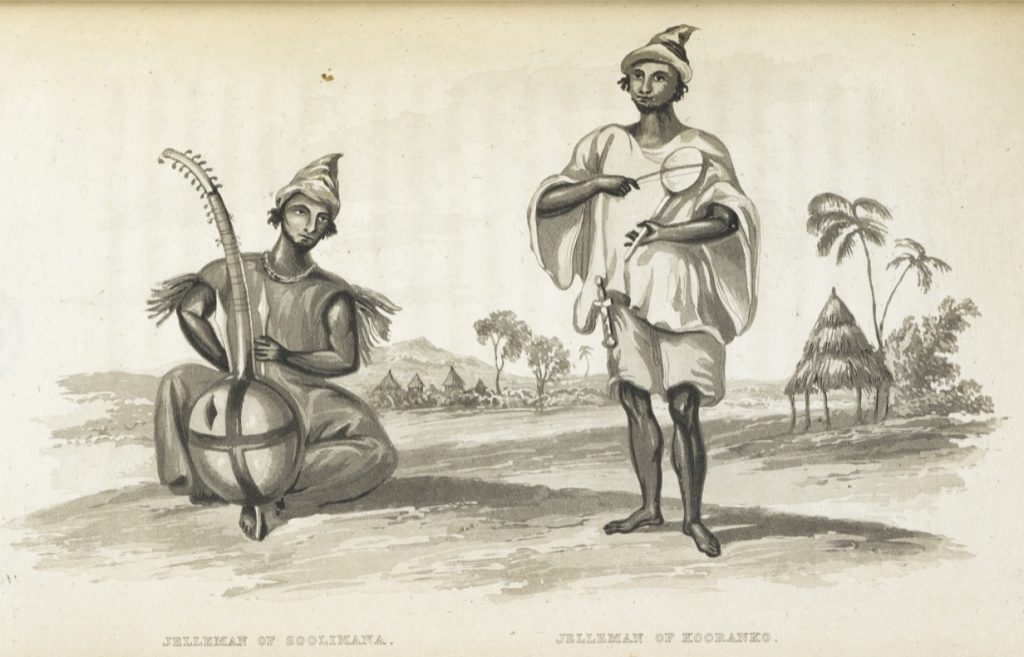 West African griots with their musical instruments. The man on the left is shown with a kora. (Image: A. G. Laing, public domain).

Nearby, a pair of Asante atumpan (“talking drums”) compliment the focus on traditional musical instruments. Stop here and listen to some drumming by the Asante musician Kofi Jatto, in a recording made in 1921 by the anthropologist Robert Sutherland Rattray. This is one of many engaging audio experiences you can tap into throughout the exhibition, to listen to recited poetry, narrated stories, music, speeches and singing.

Now we enter the spiritual realm. Religion in West Africa incorporates indigenous belief systems as well the powerful influences of Islam and Christianity. There are some exquisite artefacts on display, including an 1858 carved wooden Ifa divination board from Nigeria, a copy of the first Yoruba translation of the Bible, and an illuminated loose-leaf copy of the Qur’an, complete with the original leather saddlebag it was carried in.

The Mali Empire adopted Islam in the 13th century, and the Arabic language permeates many aspects of spiritual and religious life. The hand-scripted amulets on display here—verses or blessings written in Arabic that are carried or worn—are intriguing examples of this influence. The amulets are believed to bestow protection and power on the bearer. “Magic squares” or awfaq, drawn on paper or parchment, are also imbued with powerful spiritual properties and are common throughout the Islamic world.

The ritualised ceremonial dancing of the masquerade is an important public religious festival for many people in West Africa. Some of this magic is captured in footage of a Gelede masquerade  being performed in Nigeria, from a 1970 film called Gelede – A Yoruba Masquerade. As it’s name suggests, the festival is characterised by the wearing of masks and costumes. The Bwa people of Burkina Faso and Mali are particularly renowned for their elaborately decorated carved wooden plank masks, and there is a beautiful example of one of these on the wall.

We now enter one of the darker periods of West African history, as the transatlantic slave trade is explored. From the 15th century, more than 12 million African people were captured as slaves and shipped to Europe, the Americas and the Carribbean over a 400-year period.

An 18th century woodcut plan of the Brookes slave ship shows hundreds of people crammed into the hold like cargo, and helps to explain why more than two million slaves died during the arduous voyage from their homelands. 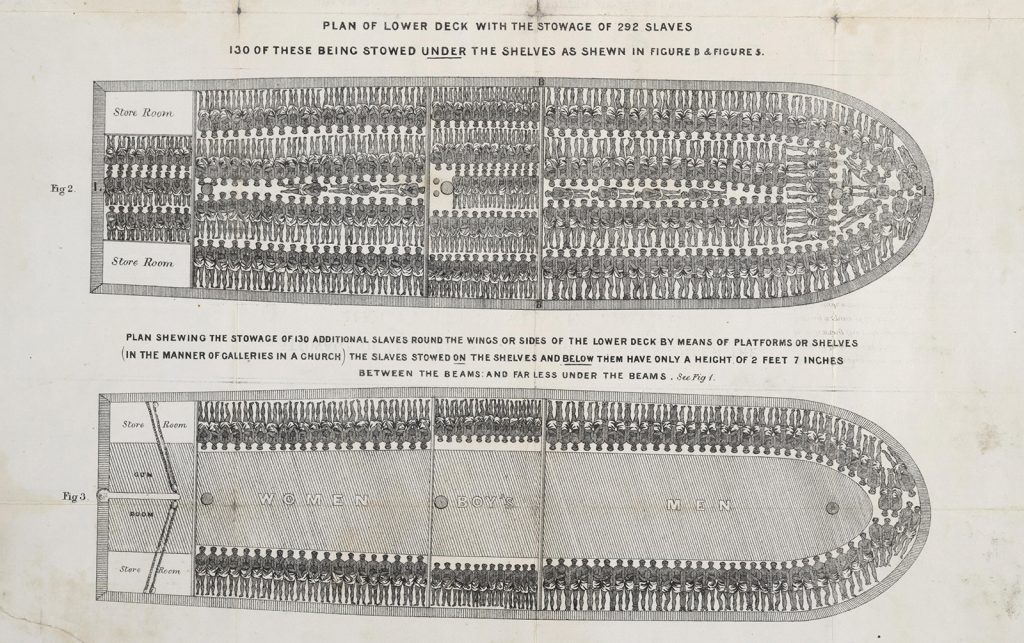 Overt rebellion against slavery erupted in political campaigns and uprisings, but resistance also manifested in more subtle ways—through dance, music, oral traditions, language and literature. A range of influential historical texts are displayed in this part of the exhibition, including the 1787 Thoughts and Sentiments on the Evil and Wicked Traffic of the Slavery and Commerce of the Human Species by Ottobah Cugoano—the first British publication by an African writer calling for an end to slavery.

Olaudah Equiano was another key figure in the abolitionist movement. As a former slave from Nigeria, his autobiography, The Interesting Narrative of the Life of Olaudah Equiano, was the first known first-person account of the slave experience. It’s publication in 1789 played a major role in the passing of the Slave Trade Act of 1807 in Britain. The exhibition boasts a number of original letters from Equiano, as well as an original first edition of his autobiography.

Ghana was the first West African nation to gain independence in 1958, and by the end of the following decade most other countries in the region had been liberated from European rule. These historic events are celebrated here in rich multimedia experiences. The rhythm of resistance intensifies as the exhibition shifts its focus onto the rich tapestry of public voices speaking out against oppression, in politics, music and literature.

There are original texts on display by Dr. Kwame Nkrumah, a leader of the anti-colonial movement in Ghana who became the country’s Prime Minister in 1952. He led Ghana to independence in 1957, and served as its President until 1966. A Pan-Africanist, one of his most influential works, Towards Colonial Freedom: Africa in the Struggle Against World Imperialism, was published in 1962. You can listen to the historic speech Nkrumah delivered outside the Parliament buildings in Accra on 6th March 1957, Ghana’s day of independence.

Moving into a more recent era of West African culture, the exhibition celebrates iconic musician and activist Fela Kuti, in words, music and video. A clip from the documentary film Finding Fela is shown, and you can read a letter Fela wrote in 1989 to General Ibrahim Babangida, then President of Nigeria, to protest against police harassment of his fans and the cancellation of one of his concerts.

Watch Fela performing V.I.P, one of his many popular songs, in this clip from a 1978 concert in Berlin.

Since independence, the countries of West Africa have seen an explosion of art and literature across the full cultural spectrum, from music and poetry to film, graphic novels and digital media. The final section of the exhibition brings this epic story right up to date.

Immerse yourself in music and film footage of London’s famous Notting Hill Carnival, and admire a contemporary colourful carnival costume created specifically for this exhibition by designer and craftsman Ray Mohabir. A nearby touch screen conjures up samples of slick contemporary music from currently charting artists like Oumou Sangare and Rokia Traoré.

Some of the most influential names in modern West African writing and film are celebrated in this space, such as Chinua Achebe, Ama Ata Aidoo and Ousmare Sembene. There is even an enclosed seating area where you can browse a selection of books by West African authors, and listen to narrated extracts from novels, poems and stage performances.

The on-screen Twitter feed of Nigerian poet and novelist Ben Okri adds a final contemporary flourish to the exhibition, leaving us in no doubt that today’s West African cultural landscape is rich, diverse, alive and undeniably modern.

As I wandered enthralled through the displays, I was approached by another visitor. She had seen me scribbling in my notebook, and she struck up a conversation with me. The woman said she was from West Africa, and that she was studying Education and Sustainability at a London university. Visiting this exhibition, she said, had been an extremely poignant experience for her. It had reinvigorated her determination to complete her degree, and apply her skills toward helping her people back home.

I can think of no more meaningful indication of the value and significance of this illuminating exhibition. 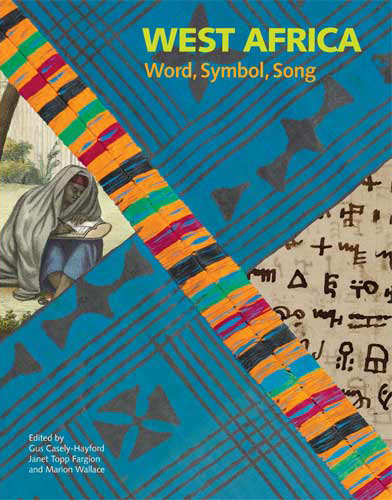 The British Library has published a beautiful book to accompany the event: